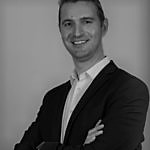 Enovacom’s Product Marketing Director, Sébastien Wetter, joined the team in 2012. Sébastien first worked for an IT services company assisting various CIOs. There he consolidated his knowledge of information systems, specializing in architecture and urbanization.

Sébastien discovered the healthcare sector when he joined Stream Consulting as an information systems consultant. He worked for several ARS, GCS and other health establishments, and then became a specialist in decision support and interoperability. Sébastien then moved on to managing a development team.